Fearless Of The Fall

Everything crumbled after Abby’s tragedy, even her close friendship with Jesse. But Ashleigh never leaves her, and doesn’t press for details. Distanced from everyone else, Abby finds solace in riding Motocross. After Jesse steps back into Abby’s life and offers his friendship once more, things slowly begin to return to normal. But explaining her reason for not speaking to him for seven months is too traumatic for Abby to reveal.

Just when it seems they’re becoming more than friends, Abby and Jesse face a horrific storm, which incredibly brings them into an even closer proximity. Due to the overwhelming damage, Jesse and his family stay at Abby’s house for a while. However, passing in the upstairs hallway at home is vastly different than passing in the hallway at school. Something between them has changed, and not for the better.

There are so many things that go unspoken, including Abby’s upcoming departure for college out of state, but neither of them seems to be able to connect. Maybe it’s best they just remain friends so that Abby can focus only on the upcoming Motocross competition.

But the arrival of Pamela, a pretty transfer student and fellow rider, complicates everything and Jesse makes a huge mistake.

Can Abby forgive him? Or will Pamela win everything?

“Come on Abby, we have to go to the basement.” Jesse shook my shoulder.

“But, why?’’ I complained, hearing a weird sound I couldn’t place.

“The storm has gotten worse. We need to get in the basement now!” He urged me pulling me up by the hand and running down the hall to the basement steps.

We hurried down the steps as this noise grew louder. My sinuses ached and my head felt like it was being squeezed. Jesse threw me in a closet pulling the door shut behind him. He pushed me as far into the back corner as he could. Pulling me down to the floor, he threw a heavy blanket over us. My mind was slowly registering what was going on. I started to shake. Jesse picked up on this and gathered me up in his arms tightly.

“I am right here Abby. We will be okay.” He whispered in the dark.

“Jess-“I started to say as a horrible noise came from outside the door.

I threw my hands over my ears and screamed. Jesse pulled my head into his chest shielding me while he gathered the rest of my body on his lap.

“It’s okay baby, everything will be alright,” he cooed in my ear.

The house shook all around us. Things were falling in on us from the shelves in the closet. I could feel the air rushing under the crack of the door. I heard the door being ripped off and felt the wind rushing all around us. I could hear myself whimpering. Jesse held on to me tightly. I kept my eyes tightly shut and prayed.

“It’s okay baby, almost over.” Jesse shouted over the noise. I held on tighter. I whimpered from the pain in my head and sinuses.

“You’re okay Abby, everything will be okay!”

When the shaking of the house slowly stopped and everything seemed to calm down, I slowly released my death-grip on Jesse and opened my eyes one at a time. My brain could not put together what my eyes saw. Through where the closet door had been in the basement I could see the sky. I looked wildly at Jesse, who had some blood on his face and arm. I quickly disentangled myself from him and began giving him the once-over. He had been hit by some debris that cut a small space on his cheek. Most of the damage was on his arm. Nothing serious, but enough to be messy. He was checking me for injuries the same time I was working on cleaning up his arm with the blanket. He seemed satisfied with the results and pulled me hard against him in a crushing hug. I returned his sentiments just as violently.

“Abby, I am so glad you are alright.” He whispered with tears in his eyes.

“I am fine Jess, are you sure that you are okay?” I asked, tears swimming in my eyes.

“We are alive, thank God!” Jesse praised sniffing. A tear escaped from my eye and rolled down my cheek.

“Abby-“Jesse groaned meeting my eyes and thumbing away the tear. He kissed me softly on the lips, it wasn’t long, but it made my insides turn to jelly. 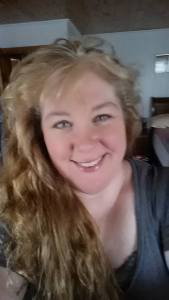 A Pennsylvania native, Amanda and her family moved to North Carolina three years ago. She is happily married with three children and a granddaughter.

A lover of all things creative, she will try whatever art of craft is out there.

You can usually find her doing one of four things; reading, writing, playing piano, or working on her embroidery machine.

Though Amanda has been writing since grade school, this is her first published book.