Sarah Alexander’s marriage to millionaire Logan Montgomery is put on hold when Logan is offered the opportunity to go on an extended archeological dig in Egypt. Though not happy with his decision, Sarah supports her fiancé, despite the fact she’s already given up her apartment and teaching position.

When Sarah’s best friend, Pippa, suggests Sarah move to Sunset Cove, she figures a new town, new job, and new friends are just what she needs to help her through the separation. If she’d known one of those friends would turn out to be kind-hearted, good-looking, well-built, Officer Kevin Jenkins, she might have figured a little harder.

Though Sarah goes out of her way to keep her relationship with Kevin on a friends-only basis, it’s clear their feelings for one another are teetering toward something more. Now Sarah must make the most important decision of her life. Will she choose the man who can shower her with diamonds or the one who isn’t able to offer much more than free donuts?

Within a few minutes, Sarah stepped into the light of the lamp at the end of the pier. Her white cotton sundress swayed in the gentle breeze. She smiled and waved. “I wasn’t expecting a welcoming party.”

Kevin chuckled. “I got here late and the party is pretty much breaking up. Pip said you’re leaving Friday so I thought I’d come and wish you safe travels.” He handed over one of the bottles.

“Thanks.” She uncapped it and took a large swig. “I’m sure Pippa wouldn’t mind if you stuck around for a while.”

If not for a certain redhead, he probably would. “I’d like to, but I’m on early shift all this month.”

“I can totally relate. When I get back to work, I’ll be on teacher shift until the end of the school year, which basically means sunup to sundown.” She took another sip. “Such is the life of ateacher, but I wouldn’t have it any other way.”

“Got any big summer plans?”

She sat on the step below him, pressed her back against the rail and stretched her legs out. “Actually, I might be making a move.”

Kevin copied her moves, only he used the opposite rail so that he could look at her. “Egypt?”

A faraway look clouded her eyes. “I wish.” She faced the ocean. “No, the place I’m thinking of is filled with friendly people, a new job, and a way to help me forget just how separated I am from the man I love.”

He’d help her forget if she’d give him half a chance. He winced at his own thought. “And where might that be?”

Electricity sizzled down his spine. If this girl was moving here, he was in for the greatest test of his life. “Really?”

Sarah tilted her head his way. “If Pippa’s mother decides to offer me the job, which I’m pretty sure she will.”

“And your fiancé is okay with you moving?”

She huffed out a laugh. “Logan postponed our wedding and moved to Egypt. The only word I’ve received from him so far was a text message to tell me he’d arrived safely and was headed directly to the site. I love the man, but at this point my fiancé doesn’t have a lot of say in the matter.”

The hurt in Sarah’s voice shamed Kevin for his earlier thoughts. He had no right to pursue her and vowed to keep his distance, starting right now. He stood and brushed sand from the back of his pants. “It’s getting late for a guy who has to be up at the crack of dawn.” He smiled down at her. “I wish you safe travels home and all the best in the future.”

Brows squished together, Sarah pushed from the step. “You make it sound like we’ll never see each other again. In case you didn’t catch my earlier drift, I’m moving here. You’re a friend ofPippa’s, so you’re a friend of mine.” She slid her arm through his. “Guess we’d better get back before Pippa thinks we’ve run away together.”

Run away together? This was going to be so much harder than he ever imagined. 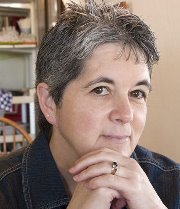 Lucie Ulrich took her time becoming a writer. Not much of a reader as a child, writing was of no interest to her–until she joined a church drama team. The desire to write a skit, and not simply act out someone else’s was so strong, that once she started, she couldn’t seem to stop. That first skit led to her becoming the drama team director, then eventually, the performing arts director at a small Christian school.

Lucie’s first novel was penned under a tree in a field in Holland. Though her first, second, and third attempts never saw the light of day, parts of each of them became the foundation for “Broken Vessels,” her first published work.

No longer involved with the performing arts, Lucie enjoys going on photo shoots with her husband, and taking long (or short) road trips. She hopes to find inspiration as she and her husband explore the four corners of the United States.